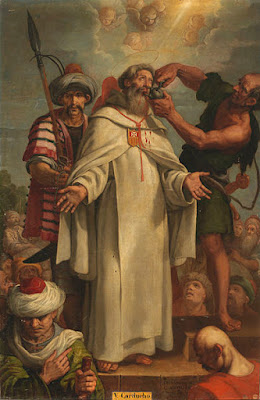 St. Raymond was born in 1204 in Catalonia via caesarian, thus earning him the name Nonnatus (“not born”). His mother died in childbirth. As a youth, he watched his family’s sheep. He joined the new Mercedarian order, which had been founded to ransom Christians from the Moors in North Africa, and was trained by the founder, St. Peter Nolasco.

He ransomed hundreds of Christians until he got to Tunis, where his money ran out. So he offered himself as a hostage for 28 captive Christians. He began preaching to his guards. The Moors allegedly bored a hole through his lips and padlocked his mouth shut to prevent him from preaching. He was ransomed and returned to Spain in 1239. He died at the Castle of Cardona in 1240 and was buried in the chapel he prayed at as a child.


Locks are placed at his altar representing prayer requests to end gossip, rumors, and false testimonies. He is the patron of the falsely accused and the confidentiality of confession. He is also the patron of expectant mothers, newborns, obstetricians, and midwives. His feast day is August 31.
Posted by Emily at 9:30 PM 0 comments

Email ThisBlogThis!Share to TwitterShare to FacebookShare to Pinterest
Labels: saints

St. Eulalia of Barcelona was a young martyr who died under the persecution from Diocletian in the fourth century. The thirteen-year-old refused to renounce her faith and was subjugated to a series of tortures including being rolled in a barrel with glass stuck into it, having her breasts cut off, crucifixion, and decapitation.

There is debate as to whether St. Eulalia of Barcelona is the same as St. Eulaia of Merida. Both legends are of a young teen girl in Iberia who suffered a series of tortures under Diocletian's reign. Both had doves appear at their deaths.

I learned about St. Eulalia as Barcelona experienced a terror attack yesterday. More than a dozen people died from an attack by North African Muslims. One portrait of her has her lying in the streets during her tortures. It’s a serene scene for one of martyrdom.

She was buried in Barcelona. In 713 during the Moorish invasion, the body was hidden (recovered in 878). In 1339, she was relocated to the crypt of the new cathedral which also bore her name, Cathedral de Santa Eulalia in Barcelona. She is the city’s patron, and her feast day in February 12.
Posted by Emily at 7:00 AM 0 comments

Email ThisBlogThis!Share to TwitterShare to FacebookShare to Pinterest
Labels: saints

Last weekend I watched along with the rest of the country as violence erupted in Charlottesville. It was sad, but not surprising. In a way, it felt overdue. White supremacists and neo-Nazis chanting “blood and soil” and “the Jews will not replace us,” rallying around vestiges of the Lost Cause, literally carrying torches and swastikas. It was surreal but familiar. Anarchists and fascists fill the plots of books from 100 years ago. But now they are also on the streets.

There is a lot of anger, a lot of absolutism, a lot of whataboutism, and a lot of false equivalences. There is no moment of respite. It just keeps mounting. It is difficult to imagine a peaceful solution. This is what happens when competing ideologies run out of negotiating space. Fundamental ideas clash so hard that they turn into actual clashes.

There have been those criticizing others for not speaking out publicly or not getting physically involved. I am probably viewed as complacently silent because I haven’t typed “Nazis are bad” on facebook. But I don’t think social media activism is real activism. I’m alert, and I’m willing to jump in and help at my micro/local level, and I hope I have the courage to do the right thing. Evil must be confronted. Evil must be condemned. But we must also not allow it to overtake our lives and fill us with hatred. We have to continue on living and loving.

Monday was the feast of St. Maximillian Kolbe. He was a prisoner of Auschwitz and offered to take the place of a father set to be tortured and killed. During a weekend of such bigotry and anger, it seemed appropriate to recall the ideology that led to places like Auschwitz. Racism, nationalism, anti-Semistism, sexism, a belief that ends justify means—they all divide and dehumanize and have no place in civilized discourse.

Email ThisBlogThis!Share to TwitterShare to FacebookShare to Pinterest
Labels: other

Suffering is a two-edged sword, and it often hurts like one. It is universally experienced in one form or another and yet massively misunderstand. It stands as an impediment, to our health, our happiness, our best selves, our securest beliefs. How can I go on when I’m in pain? How can God be loving and allow suffering? Just, why?

It’s part of the human condition; it’s part of the fallen world; it can unite us closer to Christ. All true statements that don’t mean much when someone is actually in distress. They just want the pain to stop, and the philosophizing about it can come after.

The idea of pain-free life actually diminishes life, because then life that is not pain-free seems inadequate and futile. St. John Paul II said in Evangelium Vitae, “In a social and cultural context which makes it more difficult to face and accept suffering, the temptation becomes all the greater to resolve the problem of suffering by eliminating it at the root, by hastening death so that it occurs at the moment considered most suitable.”

The cases for abortion or euthanasia makes compelling emotional arguments. People are in pain and distress; they are suffering. Of course their choice is understandable. You wouldn’t want to suffer in their place, would you? Life is hard enough; why make it harder?

That God allows suffering is one of the hardest parts of the faith for many to accept. Wouldn’t an all-loving, all-powerful God make pain stop? The answer is that the world is broken; it causes pain. By allowing us freewill, God allows pain to continue. But pain and suffering can be used to bring about good. They draw us closer to God and to one another. When you understand suffering, you understand the need for people to be loved. In pain, you stand with Christ in his passion, with the martyrs in their last moments, with all others who are hurting.

God does not want us to suffering; he does not delight in pain. But he is pleased in our endurance in faith. He is pleased with the hope we hold. He is pleased by the love and compassion we express. Pain is our weakness; the endurance of it is our strength.

Society fears pain so much that it lashes out, promoting addictive drugs or behaviors—to the point of promoting death. Rather, we as a society should help one another endure the pain. True mercy is holding the hand of one hurting, not throwing them away. True dignity loves a person, no matter their circumstance. When one is in turmoil, it sometimes takes several others to help her endure. That’s the importance of community.

"All the science of the Saints is included in these two things: To do, and to suffer. And whoever had done these two things best, has made himself most saintly." -St. Francis de Sales
Posted by Emily at 7:00 AM 0 comments

Email ThisBlogThis!Share to TwitterShare to FacebookShare to Pinterest
Labels: melancholia

Nagasaki was a small fishing village until the arrival of the Portuguese in Japan. It grew into a major port with strong influences by Portuguese sailors and Jesuit missionaries. In 1580, the city became a Jesuit colony. Japanese Christians who were being persecuted in other regions sought shelter in Nagasaki. It was called the Rome of Japan. Although there were growing efforts to quash Western/Christian influence, southern Japan continued to be openly Christian. Franciscan and Augustinian missionaries also made their way to the region.

In 1614, Catholicism was banned and the missionaries forced out of Japan. Many Christians fled or were martyred. Christianity went underground for centuries, until missionaries returned in the late nineteenth century. In 1890, Nagasaki got its first bishop, the Catholic population in the diocese doubled. By the twentieth century, Nagasaki was once again the center of Japanese Catholicism. Of course, the city is often known for something else. 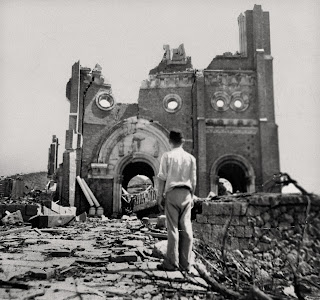 Yesterday, the president responded to North Korean bluster by threatening “fire and fury, like world has never seen.” But the world has already seen pretty egregious fire and fury, so what was his threat? How far is he willing to go? Seventy-two years ago today, the U.S. dropped its second nuclear weapon over Nagasaki (the first being dropped over Hiroshima three days earlier). The events ushered in a new era – humanity now had the ability to obliterate itself. And it became a question of whether we were willing to.

In the intervening years, it has been a testament to humanity that while the number of counties with nuclear capabilities has grown, no one as resorted to use of nuclear weapons again. But the threat lingers, and quick-trigger mechanisms and narcissistic leaders make the threat feels real.

Recently, I read A Canticle for Leibowitz, which follows the rebuilding of the world after nuclear destruction—right up to the next nuclear destruction. While the book offers the hope of the persistence of the faithful, it also articulates the despairing that humans don’t learn from their mistakes. They repeat the same threats and violence. Sin is uncreative. So of course the Cold War talk of nuclear annihilation crops up again on the anniversary of the first nuclear bombings.

In particular, the Christian community of Japan suffered from the bombings. The Urakami neighborhood of Nagasaki was the epicenter of Catholicism in the city; it was also the epicenter of the atomic blast. Of the 12,000 Catholics in the Urakami district, 8,500 were killed, including those worshipping in the cathedral, which was the largest Christian structure in the Asian-Pacific until that day. The Japanese could not understand why Westerners would harm civilians who practiced a shared (Western) faith.

Dr. Takashi Nagai was a resident of Nagasaki. He said, “…It was not the American crew, I believe, who chose our suburb. God’s Providence chose Urakami and carried the bomb right above our homes. Is there not a profound relationship between the annihilation of Nagasaki and the end of the war? Was not Nagasaki the chosen victim, the lamb without blemish, slain as a whole burnt offering on the altar of sacrifice, atoning for the sins of all the nations during World War II?” On August 15, 1549, St. Francis Xavier arrived in Nagasaki. On August 15, 1945, Japan surrendered WWII. Dr. Nagai interpreted the end of the war coming on the Feast of the Assumption as a divine message. But did anybody hear it? Or does the cycle of violence just start again?
Posted by Emily at 8:10 PM 0 comments